I have a friend who has become seriously SMUG and wants to use Facebook and other social media tools in her home-based marketing business. She has an organization involved in selling stuff, and wants to be able to communicate with people in her marketing network, which is widely dispersed geographically.

In essence, she would like to create an intranet without the corporate firewall.

If her team members all had a company email address (e.g. personname@companyname.com), Yammer would be a great solution, and you can read all about it in the Yammer curriculum here at SMUG.

But that’s not the case in many small or home-based businesses, nor is it for my friend.

Let’s call her “Terri” (since that’s her name). One of “Terri’s” concerns is that when she does business-oriented work on Facebook, the things she posts get all mixed in with her personal Facebook feed. And while her business activities may not be super secret, she would like to keep personal and work activities somewhat segregated.

A Secret Group in Facebook can be a good answer in this case.

To use this, though, everyone in your group needs to be a Facebook “friend” — at least until you have invited them into your secret group, although there is a workaround, as I will explain below.

Here are the three steps to creating your free small business intranet, assuming you have already created your Facebook account. (You have done that, haven’t you?)

Step One: Create a new Group in Facebook. For purposes of demonstration, I created Terri’s Facebook 201 Test Group. You’ll note that if you click that link (at least until you complete your homework assignment), you won’t be able to see the group.

When you create your group, you’ll want to add descriptive content, but I just included some basic placeholders for illustrative purposes. 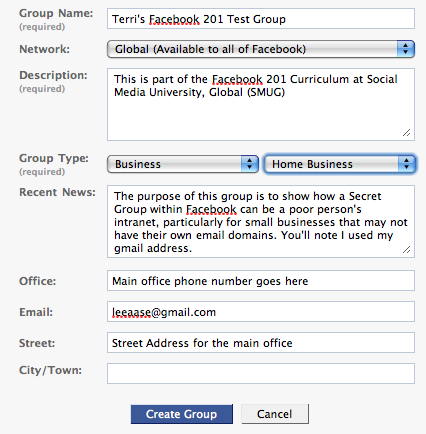 Be sure to make it available to all of Facebook (you’ll add the secrecy part later) and choose your group’s name carefully. You can’t change those elements once you have saved them, so your only option if you make a mistake or decide you want to change your group name is to create a new group and ask everyone to join the new one instead.

Step Two: Upload a picture or logo, and set the basic characteristics of the group, including whether everyone can upload pictures and photos, whether people can participate in the discussion boards, and the privacy level (Open, Closed or Secret.) For this application, you would choose Secret, although there is another alternative that may help you form the group more quickly, which I will describe in Step Four.

For “Terri’s” secret group I just uploaded a picture I took on a recent airline flight: 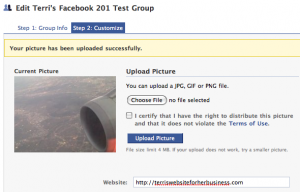 And here are the further settings used in this second step, particularly choosing to make the group Secret. (Click to enlarge.) 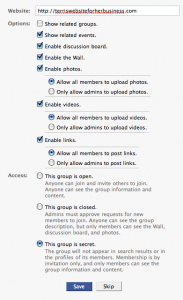 Note that these settings, unlike those from the first step, can be changed later. And because you have chosen to make the group Secret, Facebook doesn’t ask whether you would like to post a story to your news feed about having created the group.

Step Three:  Invite members. If you set your group up as Secret, the only way people can join is by invitation, which means they need to first be your Facebook friends.

The other option is to start with the group as Open or Closed, in which cases people can join on their own or request to join. You could decide to start with one of these options, get everybody you want into the group, and then change it to Secret. As Admin you can kick anyone out of the group, so if some unsavory types wandered in while you had it Open you could give them the boot. This may be a good method to enable you to build your group more quickly.

Any group can be made Secret at any time. If, for example, I wanted to start making SMUG more exclusive, I could convert our Facebook group to closed or secret. Making it closed would require SMUGgle wannabes to request permission to join, while in the secret configuration they wouldn’t even be able to make that request through Facebook; I would have to invite them before they could even see that the group exists. (Don’t worry: the SMUG group is staying wide open, and you can see and join it by clicking here.)

Once Terri has all of her members added, she can communicate easily with them by using the “Message All Members” link, which enable her to send a message to everyone in the group. 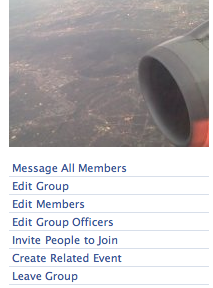 The best thing about all of this is it will be invisible to her regular Facebook friends who aren’t part of her business. She can post whatever she want to the group without it showing up in her personal timeline.

This demonstration group will stay secret permanently as part of the Facebook 201 course. I’m certain that “Terri” will be forming her own secret group soon for her work team.

As I’ve said previously, for the vast majority of business uses, the privacy and secrecy you can have through a secret Facebook group will be more than sufficient. Your business just isn’t all that interesting to other people!

And Facebook 201 shows another benefit of a secret group: not only does it keep your business information private; it also keeps your “regular” Facebook friends from being bored to the verge of “unfriending” you by your mundane (but important to you and your colleagues) business activities.

In an economic recession, how cool is it that you can create a free intranet for your small business in about 5 minutes?

MacGyver would be proud! 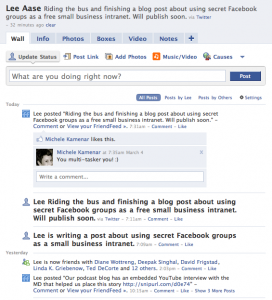 Even though I have uploaded photos and video to two different Secret group since yesterday, none of those activities show up in my news feed.