From the “Better Late Than Never” Department…

In July I had the opportunity to speak at the Minnesota Medical Group Management Association annual meeting in Duluth, on the shore of Lake Superior. We had a great group in my session, and among the participants was Brenda Jaye of Fairview Physician Associates.

After my presentation, Brenda told me about a neat program she and her colleagues had developed, called “Maximize Your Inhaler.” I thought it was a cool application of Flip cameras and nimble production, so I decided to practice what I had been preaching about simple, quick video production right then and there. Here’s her description of the program:

That was on July 24. It’s almost a five-hour drive from Duluth to my home in Austin, Minn., so it’s understandable I wouldn’t get the video published that night. I have no good excuse for the 194-day delay since then. 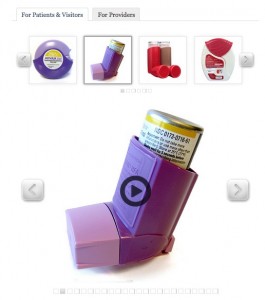 The Maximize Your Inhaler site has pictures of the various inhalers that visitor can scroll through to find theirs. When they click the arrow to play it launches a video featuring Pharmacist Heidi Mandt explaining that inhaler’s particulars and demonstrating how to use it. Here’s a sampler:

I think this is a neat resource. It’s nice that Brenda and her colleagues have made this available to anyone on YouTube, as well as being embedded within their site.

Brenda is going to be participating in our Social Media Residency in Rochester, Minn. on Monday. I look forward to catching up with her and seeing how this program has developed, and what she would like to try next.