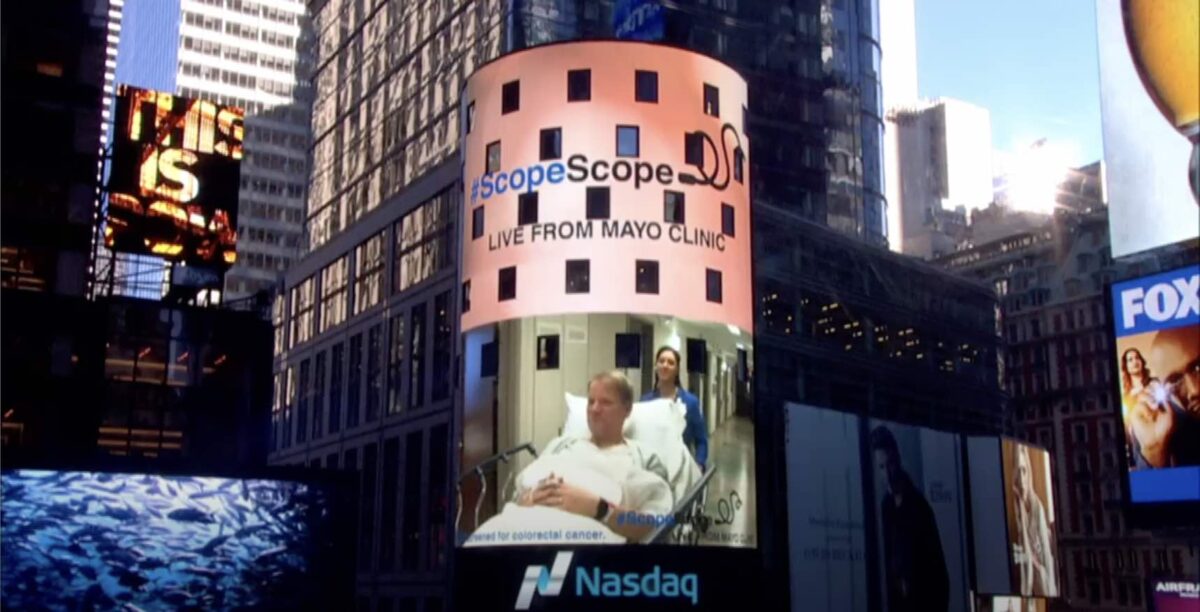 As important as teamwork is among Mayo Clinic staff, that isn’t its only context. As we showed through various Mayo Clinic Social Media Network projects, collaboration with colleagues and organizations outside of Mayo Clinic multiplied the impact as well.

I’ve previously cited the writing of Bringing the Social Media Revolution to Healthcare, as well as our international social media summits in Australia and Dubai and our work with Hootsuite to produce the first CME-accredited course in the basics of health care social media.

Here are a few more highlights of ways we worked with other organizations on important projects with broader public purposes:

From my perspective this is an ideal situation for applying social media for disease prevention. Colorectal cancer is one of the leading cancer killers, but if screening detects a precancerous polyp it can be removed before it can turn into cancer. And yet only about 70% of eligible adults were getting screened in the middle of the last decade, when #MCSMN began working first with Fight CRC and then with the broader National Colorectal Cancer Roundtable (NCCRT).

In 2015 we conducted the #StrongArmSelfie campaign with Fight CRC, which urged advocates to post selfies of themselves flexing against colorectal cancer to raise awareness of the need for screening. One of Mayo’s key contributions was producing this music video for an anthem country artist Craig Campbell, a Fight CRC ally, wrote and recorded in support of the campaign:

As we were in planning calls with Fight CRC discussing what to do for an encore in 2016, it was about the time Periscope was making live video streaming available to anyone with a cell phone. TV anchors had previously broadcast their experiences in getting a colonoscopy to demystify the process and raise awareness, so we got the idea of streaming a colonoscopy from Mayo Clinic via Periscope.

Thus was conceived the #ScopeScope. And about five minutes into the discussion I recognized it would be a lot simpler from a patient consent perspective if someone who fit the demographic and was part of the planning team were to be the patient whose colonoscopy was streamed. I knew a guy.

We did events with NCCRT at the Hard Rock Cafe in New York in 2017, in Los Angeles in 2018 and at CDC HQ in Atlanta in 2019, all aimed at driving the screening percentage to 80%. Personally, seeing my image on the NASDAQ Jumbotron in Times Square (as shown in the header of this post) was an unforgettable milestone.

Experts by Experience. Medical and scientific experts develop deep understanding of disease processes, but they don’t have the perspective of the patient who actually lives with the disease. John Novack, then with the online patient community Inspire, approached us to take over publication of a monthly series of blog posts by patients, which we did for two years. Authors alternated between Inspire members and those from Mayo Clinic Connect, and we posted them on the #MCSMN site.

#MayoSHSMD Virtual Conference(s). In October 2019 Lisa Hinkle from the Society for Health Care Strategy and Market Development (SHSMD) of the American Hospital Association approached Dan Hinmon and me with an idea to jointly produce an advanced conference on social media and digital marketing in May or June of 2020. This would be in addition to SHSMD’s annual conference later in the year, and would be virtual.

Having just completed the #MCSMN conference and with the #hcsmDXB conference still to come in December 2019, Dan and I agreed, in consultation with Dr. Timimi, that a virtual conference in 2020 would be a good change of pace.

#MayoSHSMD was virtual before virtual was essential. And based on its success, we were delighted to do another virtual conference with SHSMD about eight weeks ago, which as it turned out was our last #MCSMN event. Lisa Hinkle, Diane Weber, Stephanie Stewart and the whole SHSMD team were great collaborators, and they’ve expressed eagerness to continue to serve this movement even as the #MCSMN organization sunsets.

In all of these collaborations, it wasn’t just Mayo Clinic joining with the national organizations. We had many of our external members of #MCSMN participating as well, which made the projects even more powerful.

In the final two posts in this series chronicling the work of #MCSMN and the people who made it happen, I will highlight other external collaborators as well as Mayo Clinic staff (including social media team members through the years) whose contributions have been so meaningful.