With Facebook now offering live video streaming through Facebook Live, I thought it would be great to test whether I could embed the video on a WordPress blog. Looks like it worked!

That’s the title of the presentation I’ll be giving in Washington, DC today along with CareHubs CEO Paul Speyser, for the annual conference of the Society for Healthcare Strategy and Market Development, a.k.a. #SHSMD15. Yesterday we had our Social Media Residency at UC-Davis in Sacramento, and so as I write this, I’m at the airport in Detroit on the way to Washington, DC, having taken the Red-Eye from SFO to DTW last night.  If all goes well, I should be in DC by 9 or so.

I had an opportunity to preview some of what we’ll be discussing in our presentation in a podcast conversation with Stewart Gandolf, which he published last week. As I mentioned in the interview with Stewart, I think it’s been about a dozen years since I’ve spoken at this conference, back when my main job was media relations for Mayo Clinic. It’s fun to consider all that’s changed since then, and yet how our work now with the Mayo Clinic Center for Social Media is consistent with what we were doing in 2003, but also with more than 150 years of Mayo Clinic history.

Here’s the slide deck Paul and I will be using:

Leading Change from the “Other” C-Suite from Lee Aase

We’ll be talking about how we’ve collaborated to create social networking capacity through an owned platform for our Center for Social Media, and how we’re now applying those capabilities for patient education, patient communities, blogs and news delivery.

While many of the slides contain hyperlinks to some of our WordPress-based sites and communities, here are a few initiatives I’d like to particularly emphasize:

Here are a couple of our sites that will have significantly redesigned looks in the next few weeks:

If you haven’t yet signed up, please take advantage of our free Basic Membership in the Mayo Clinic Social Media Health Network.

Finally, here are links to some of the books we mentioned, which have influenced our thinking:

I look forward to a good discussion.

This week we have visitors at Mayo Clinic from Odense University Hospital and the Institute of Clinical Research at the University of Southern Denmark. I enjoyed meeting them last night at a reception and dinner they hosted (for the next few hours you can see the Periscope video of the gathering), and today I will be presenting the work of our Mayo Clinic Center for Social Media.

My presentation is scheduled from from 10-11 a.m. CDT, and I plan to Periscope the Q&A session from our Mayo Clinic account. That should start around 10:40 CDT.

You can learn more about Periscope and our Mayo Clinic experiment with it on our Social Media Health Network site.

I hope you will join our Mayo Clinic Periscope experiment today. Please chime in with your greetings and questions (and of course we’ll appreciate hearts, too). I think you’ll enjoy it, and it will give our visitors a first-hand experience of the powerful reach of social media.

Here are my slides from today’s presentation:

Twitter has taken a minor but annoying step back in the usefulness of its email notifications.

I have selected relatively few types of email updates to receive from Twitter, but one of the ones I had appreciated was notification that someone has sent me a direct message. And in the old days (meaning maybe a month ago), the text of the direct message was sent along with the email.

In the last week or two that has changed, and not for the good. Here’s a message I got yesterday: 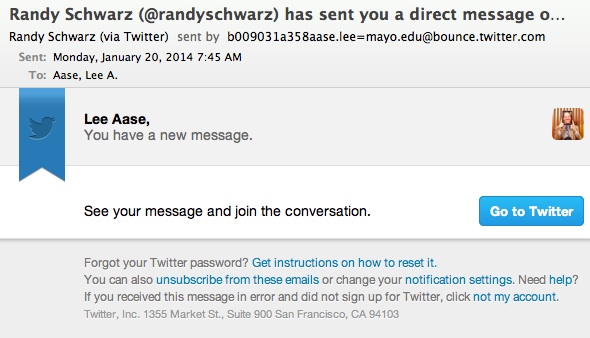 This looks like something done to increase page views on Twitter.com, but not thinking of the users and what they need or prefer.

It’s a minor annoyance, and I didn’t say anything at first. But after having this happen a few times, I decided to take a few minutes for a post, because it relates to a larger point that applies to all of us.

Think about the changes you make in your online interfaces, and how they serve (or may annoy) users.  Don’t make them work harder to get the information they need. You may have valid business reasons for your changes, but if you’re making withdrawals from your reservoir of customer good will and loyalty, the benefits may not be worth the cost.

Even more importantly, try not to get into these cost/benefit calculations. Just do the right thing for the customer (as Twitter generally has until this point.) Doing the right thing will be better for everyone (including you) in the long run.

I was disappointed to see Twitter swerve into this short-term thinking. It’s a good reminder for me to be sure that what we’re doing keeps users and their needs first.

Update (2/25/14): I just noticed that Twitter has returned to a more useful direct message email notification. Looking back through my deleted emails, it appears this happened back on Feb. 12 or 13. 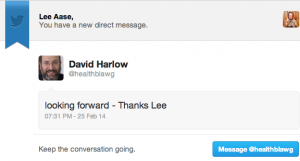 When I first heard about the racy photo tweeted from Rep. Anthony Weiner’s account, I thought the “I’ve been hacked” defense seemed dubious, especially since Rep. Weiner had not chosen to have law enforcement authorities investigate the alleged crime.

I thought it was much more likely that he had simply made a mistake, and replied to a tweet from the young lady in Washington state instead of sending a direct message with his photo. It’s a difference between typing “@” before her username instead of “d “ – which made the photo link visible to his 45,000 followers, and by extension, to the world.

Following his mistake, we now know Rep. Weiner broke just about every rule of PR and crisis management – making up a story about being hacked, denying that he had sent the picture and evading the question of whether the photo was of him. I thought the low point was when he berated ABC News’ Jonathan Karl for “not understand(ing) how social networks work.”

Monday we learned that the simple explanation was in fact the right one. As The Hill reported:

“Once I realized I had posted it to Twitter I panicked, I took it down, and said that I had been hacked,” Weiner said at a press conference in New York. “To be clear the picture was of me and I sent it.”

In actuality, Weiner had committed one of the classic errors of the micro-blogging platform: tweeting a message that was intended to be sent as a direct message. Direct messages are private messages that can only be sent to a user to one of their followers.

This outcome, especially when considered in light of a similar issue involving former Green Bay Packers quarterback Brett Favre (OK, he played for the Vikings, too) and the allegations of his “sexting” a female sideline reporter when he played a season with the New York Jets, provides a fitting illustration of a principle I’ve found myself regularly mentioning in presentations, and which I am now codifying as my 38th Thesis:

Social media raise the cost of bad behavior because they make it more likely misdeeds will be discovered.

By the account of Jenn Sterger, the photos Brett Favre allegedly sent her via text message were at least as explicit as Rep. Weiner’s. But we’re still saying “allegedly” in the Favre case, partly because the photos were sent via SMS instead of on a social network like Twitter. And her revelation came about two years after the alleged incident. The first news story about the Weiner tweet, by contrast, showed up within just a few hours.

Twitter is much more powerful as a communication vehicle than text messaging is because tweets can be discovered and spread by anyone, and because for regular tweets (as opposed to direct messages), there are no intended “recipients.”

But the same tools that can be so beneficial when used for good can have devastating effects when mishandled. The Favre sexting controversy took two months to be resolved,  with the NFL commissioner finally settling on a $50,000 fine. The Weiner case took 10 days from tweet to tearful confession.

Of course there were various differences between these two examples, and it isn’t my point to go through these fine distinctions. I just think it’s interesting to see how rapidly the Weiner case developed, and to consider how social media accelerated his decline. Two weeks ago tomorrow he was being mentioned as a leading candidate for mayor of New York. Today he has many of his party members in Congress urging him to resign.

In my presentations I have often suggested that users should apply the “front page” test to all of their online postings. As we’ve seen recently with Rep. Weiner, sometimes those postings really do make the front page.

What do you think? What are the social media lessons you take from this case study?