Last week, I got a direct-message tweet from Amber Smith (@AmberSmith), a reporter from Syracuse, NY. I had met Amber previously (because of Twitter) and we have interacted via Twitter, and she was tweeting because she had seen some chatter about one of our Mayo Clinic videos being among the most-tweeted videos on Twitter. It’s about continuous chest compressions, a kind of CPR that doesn’t involve mouth-to-mouth.

I have embedded that video below, but here’s the link to the in-depth story Amber did for Syracuse.com, as well as the sidebar about the viral phenomenon with this video (most of the nearly 3 million combined views as of this moment have been from a copy the Arizona Department of Health Services uploaded) and a post with more links to relevant research papers on Amber’s personal blog.

This story is another example of both Thesis 9 and Thesis 33. The original video was produced as part of our Mayo Clinic Medical Edge news program for television stations, and the story ran in 2008. Now, because of the power of social media, it has gone viral, which has led to more mainstream news coverage, which will undoubtedly increase the YouTube traffic. And as a result, more people who are untrained in mouth-to-mouth CPR will be aware of the continuous chest compressions alternative.

I hope you will take a couple of minutes to watch the video above, and also to read Amber’s story. Then I hope you will share this post (or the video) with your friends via email, or Facebook, or Twitter, or however you like to spread the word. 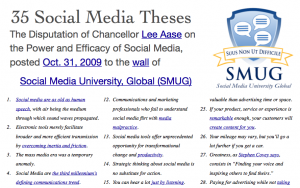 Ever since I posted the 35 Social Media Theses, 492 years after Martin Luther posted his 95, I have planned to put them in a one-page PDF, to make them more portable. Here is that document:

35 Social Media Theses (right-click and “Save as” to download.)

The Creative Commons license simply requires that you not change the original document as you pass it along and that you credit the source.

You will note that within the PDF I have included links to posts or news articles on SMUG or elsewhere that support or explain the various points.

I hope this can be a good discussion starter for you in your workplace or in other organizations you’re trying to get involved in social media.

Let me know how your conversation goes!

Among the most important benefits of social media tools are their ease of use. While updating a static Web site can be onerous, and video shooting, editing and distribution also can be complicated, the beauty of blogs, Flip cameras (or Kodaks) and YouTube is the nimble authenticity they bring to communication.

Of course, it’s possible to develop bureaucratic processes that will completely erase the advantages of social media. By trying to fix perceived shortcomings of the standard social media tools by upgrading production values, you can lose their freshness and authenticity.

Don’t do that. Don’t complicate things.

To encourage you in this, I’m sharing a couple of examples from our Mayo Clinic experience, in which the nimbleness of social media tools enabled us to capture compelling stories that formerly would have been impossible, or at least impractical.

On Friday, September 18, 200, I received a late-afternoon call from one of our Mayo Clinic cardiologists, Dr. Michael Ackerman, telling me about an infant patient from the San Francisco area he had been evaluating. The call came about 3 p.m., and within an hour I was interviewing Trevor’s mom in the courtyard near their hotel. Here’s what she had to say:

See the rest of Brenda’s story.

The Kings were leaving for home the next morning, and if I had been unable to shoot the interview, we would not have been able to tell this story. Getting one of our professional videographers to break away on short notice would have added one more complicating factor to the equation, making it unlikely to work. But with the Flip, we captured the authentic moment.

Here’s another story from Sharing Mayo Clinic about Dr. Ackerman that will warm your heart. It doesn’t necessarily fit the theme of this post, but you should check it out anyway.

On Tuesday, June 3, 2008 at 8:45 a.m. I got some good news and some bad news. The good news was that one of our Mayo Clinic researchers, Dr. Victor Montori, had a paper being published in a major medical journal, Journal of the American Medical Association, or JAMA.

The bad news: the paper was being published that day, and was coming “off embargo” in just over six hours. This left us no time to prepare a formal news release or shoot and edit broadcast-quality video. In the era before our Mayo Clinic News Blog, we would have had no good options for calling attention to this research.

But since we had the blog and the Flip camera, called Dr. Montori and interviewed him at 10:20. By 11:55 we had uploaded the video to YouTube and had also prepared this blog post about the diabetes research. We sent “pitches” by email and Facebook to some journalists starting at noon, and the next day the Wall Street Journal Health Blog carried the story and embedded this video from our YouTube channel:

These are just two case studies of the practical advantages of using social media tools as more efficient and effective means of doing your work, if you don’t purposefully complicate things.

How have you used the Flip or similar tools for authentic storytelling?

Thesis 4 would be reasonable, I think, based on these factors alone. Social media are the defining communications trend of this millennium, which is not to say they are the only important means of communication or that they have supplanted TV, radio and newspaper. (OK, well maybe newspaper.) But they embody the communications characteristic that defines our time: that anyone

But Thesis 23 says social media already are bigger than most people realize, because they don’t just include networking sites for which you need an account to participate, such as Facebook, LinkedIn, Twitter and MySpace.

YouTube is in essence a social networking site for videos, and it is the world’s second-biggest search engine after Google. So everyone who watches a YouTube video is in essence participating in social media. Those videos may even be embedded on  mainstream media Web sites. But the reason we even get a chance to see them is because there is a site like YouTube which is open for anyone to upload a video at no cost. This again is how social media are defining this era.

The other reason I say everyone uses social media comes from the nature of blogs. I heard Susannah Fox of the Pew Internet Project speak at a conference in October, and she said something that validated an opinion I’ve long held. She said she expected that her organization would soon retire one of its standard survey questions because it doesn’t provide reliable information. That question asks whether respondents read blogs or not, and the affirmative percentage has held steady at about 30 percent for the last few years.

But the reality is that a blog is just an easy-to-publish Web site that allows comments. So lots of people are reading blogs as they search and surf the Web, and in most cases there isn’t a flashing icon that alerts readers that they are on a blog. I believe that anyone who spends appreciable time on the Web spends at least some time on blogs. Especially given how search engines like Google favor blogs and YouTube videos, it’s almost inconceivable that someone could do 20 Google searches without ending up on at least one site with social media elements.

So between YouTube, the most popular video source on the Web, and blogs, which are the easiest way to publish a Web site, I believe the overwhelming majority of Web users participate in some way with social media, even if it’s only as a consumer of content.

In Thesis 23 as originally posted I said:

Almost all Web surfers use social media today. They just may not know it.

For the headline of this post, and in keeping with the provocative nature of social media, I just rounded up and said “Everyone.”

I don’t think it’s much of an exaggeration. Everyone uses social media today, whether they know it or not. Even more than that, social media dramatically affect the types and amounts of content available to be consumed.

As social media grow, the proportion of time people spend on sites with social capabilities also will increase, as will the proportion of participants moving from strictly consuming content to at least commenting or rating. And many users will move from the ranks of consumers to producers, especially as the user interfaces continue to get easier.

The fact that you are reading this post means you are a social media user, at least at this moment.

Welcome to the revolution.