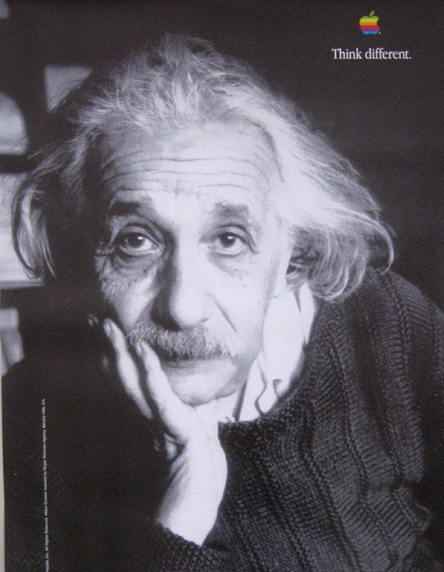 As I was weeding my RSS feeds this morning (aiming to get down from 250 or so to a more manageable target of 100 that I can regularly peruse), I came across a post in which this excellent video from TED 2006, a quick talk from Sir Ken Robinson, was embedded:

It’s a great talk with lots of thought-provoking elements, and one particular portion reflects exactly what SMUG is all about. He says (in the conclusion of a story that begins at about the 4:15 mark):

Kids will take a chance. If they don’t know, they’ll have a go…They’re not frightened of being wrong. Now, I don’t mean to say that being wrong is the same thing as being creative, but what we do know is if you’re not prepared to be wrong, you will never come up with anything original…and by the time they get to be adults most kids have lost that capacity.

This is another way of saying what I often say in my presentations, in anticipation of the “I’m too old to understand all this social media stuff! The kids are the ones that get this, because they’re grown up with it!” objection:

You’re kids aren’t smarter than you are. They’re just not afraid to look dumb!

So don’t just take my word for it. Take it from an internationally recognized expert on creativity who was knighted by Queen Elizabeth II and who has his own entry in Wikipedia (as opposed to a guy who gave himself the “Chancellor” title.)

If you haven’t yet become a SMUGgle, I hope you’ll enroll now. It’s 100 percent free, and it’s your chance to get hands-on experience in social media in a non-threatening environment.

And maybe it will help rekindle some of the creativity that the educational system (and the industrialized workplace) has been driving out of you for decades.

I’ve been a little quiet for the last couple of days, as I’ve dived back into work after a five-day family trip. I’ve been learning some really interesting things that will revolutionize SMUGs teaching methods, and look forward to implementing some of this. I’ll have a post demonstrating this soon.

But meanwhile, here’s a good read from Jeff Jarvis at Buzzmachine.

Internet curmudgeons argue that Google et al are bringing society to ruin precisely because they rob the creative class of its financial support and exclusivity: its pedestal. But internet triumphalists, like me, argue that the internet opens up creativity past one-size-fits-all mass measurements and priestly definitions and lets us not only find what we like but find people who like what we do. The internet kills the mass, once and for all. With it comes the death of mass economics and mass media, but I don’t lament that, not for a moment.

BuzzMachine » Blog Archive » The myth of the creative class.

I sometimes disagree with Jeff because of his almost religious antipathy for religion Update: frequently and caustically expressed opposition to at least “certain policies of certain churches” (see his comment below, and my clarification), and with his new book attributing deity to Google his irreverence goes too far, but more often than not he’s on target when he talks about the new economics of media.

This post is particularly good. The celebrity-oriented “creative class” is an artifact of the mass media, when access was scarce and limited by gatekeepers.

Now millions of bloggers, podcasters and video producers have access to low-cost equipment through which their creativity can flourish.

The days of moving to Nashville or LA to pursue a record deal (“Record? Daddy, what’s a record?”) are gone. Anyone can have access to the world through social media tools.

Will many make a living at it? Nope. Fewer will than did in the “old days.” Just ask the newspaper guild. When everyone can publish, and there is no monopoly or oligopoly control on the means of publication, the guilds no longer can command premium prices.

But if, as Jeff says, 81 percent of us think we have a book inside of us, we now have a chance to let it out.

You don’t need to get a book deal, and an advance from a publisher, and get permission to speak out. You can just do it. And if people find what you have to say is worthwhile, they’ll link to it. Like I just have to Jeff.

How about you? What story, or song, or book, or short movie do you have inside you?

What’s keeping you from just starting?