As detailed here and here, I had an opportunity this morning to join Larry Weber, founder of Weber Shandwick, in a seminar on social media for the Massachusetts Hospital Association.

During the Q&A session that followed, Lorie Martiska of Heywood Hospital in Gardner, Mass. said she had experienced a real “Aha!” moment during the presentation, so I asked her if she would be willing to share it with the world. She was, so here it is:

It’s really gratifying to be able to help people like Lorie who feel pinched for resources, and to help them see the potential of some of these inexpensive (or even free) technologies. The tools are great if you have staff and resources, but they’re even more important if you don’t, because they help you stretch what you do have. 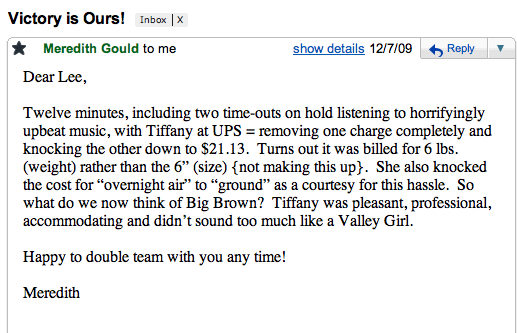 In many of my presentations this year I have used the video embedded immediately below to illustrate the quality available through consumer-grade video cameras, such as the Flip video camera. With my daughter Rachel’s permission, here’s an example of what you get from the Flip UltraHD

, from my granddaughter Evelyn’s first birthday party in August:

Here is an example of a video I shot earlier in April with the standard definition version of the Flip video camera (before we got HD), with Philadelphia Phillies outfielder Jayson Werth, in a room behind the dugout at Citizens Bank Park in Philadelphia:

You will note that in this video there is background noise from the indoor pitching machine and batting cage, but I think in both cases the quality of the video is perfectly acceptable for use on the Web. And since the HD only costs $50 more, I think it’s well worth the extra cost. (Of course, I’m kind of partial to the subject of that HD video .)

Kodak has some similar consumer-grade video cameras, such as the Kodak Zi8 HD

, and their key advantage is that they have an external microphone jack, which could improve the audio quality in some cases. If I had used that camera for the interview with Jayson Werth, for instance, the batting cage noise probably would have been less pronounced. The good news: you can put in a huge memory card to get really long recording times without having to download the files to your computer. The bad news: extra cost.

Here’s an example of a video we shot with the external microphone, and uploaded to YouTube:

One additional advantage of the Kodak is it can record in 1080p, but can also downshift to 720p or even standard definition. Here’s a brief sound bite to that effect from my colleague Joel Streed, shot and edited as 1080p.

The downside of 1080p is that for a video of any length, the processing power required is pretty immense, without much of a perceptible difference in image quality, at least for Web video.

If you don’t see yourself complicating the recording process by attaching a remote microphone to the interview subject, the Flip video camera is fine.

So, to sum up, here are the advantages I see for each of these cameras (as compared with each other):

The really good news to take away from this is that there are at least a couple of good options for capturing video using consumer grade cameras for use in your professional efforts in social media, whether it’s posting videos to YouTube, Facebook or some other sharing site. Both of these cameras are light, small and therefore easy to carry in a coat pocket or purse, so you’ll never need to worry about missing an opportunity to capture video.

The first rule of video is that you can’t edit what you don’t shoot, so these cameras both make it more likely you’ll get some good material for editing.