That’s how I would describe this Adidas Super 64 tournament. In the first two days, the teams are in pools (as I described in this post), which is like the conference regular season. Those teams that do the best in the pools (or are in a Super Pool, the equivalent of one of the BCS conferences) make it to The Big Dance, or the Championship Bracket. The others go into the Gold Bracket, which is analogous to the NIT.

Yesterday our Minnesota Fury Gold boys lost in the equivalent of an NCAA 7 seed vs. 10 seed matchup. I’ll update this post later with video highlights. But overall this Adidas 64 experience has been great, and after a trip to the Hoover Dam today we’ll check out the semifinals and finals tomorrow in the 17-and-under division. Many of the players in those games already have committed to major colleges, so it will be fun to watch some high-level ball.

This tournament brought the Fury Gold season to an end, and it was a great experience. My son Joe got to play with his cousin Tom and another Austin High School teammate, Zach Wessels, and some great boys from the Twin Cities area. They went 42-8 on the season and won several tournaments.

Given that they play only 24 games during their regular high school season in Minnesota, maybe the better analogy is that this AAU season from April to July is like two regular seasons. And especially since they are mostly playing against the best competition in their age group from the northern U.S.  (or in the case of this Las Vegas, from the whole country), it’s been a great way for them to develop their skills and become better players.

It should make for a lot of fun during next year’s Austin Packers regular season.

As I posted yesterday, I’m in Las Vegas for several days for the Adidas Super 64 basketball tournament. The teams play in age group categories (17 and under, 16 and under, etc.) and the first two days are pool play to decide which teams make the Championship bracket and which ones play in a lower bracket.

In the case of the 16Us (where my son Joe and nephew Tom play for the Minnesota Fury Gold), there are 88 teams in pools of four. Four of those (Pools A-D) are “Super Pools” in which all four teams make the Championship bracket. Those 16 teams all happen to be sponsored by Adidas. Coincidence?

In the remaining 18 pools (E-V), after the four teams play each other in round robin format, the two top teams make the 52-team Championship bracket. Our Fury Gold boys won big yesterday, and had a nice 46-32 win this morning against a team nominally from Texas, but which had a strong international flavor. Here are the highlights:

Since our boys are 2-0 in the pool, they’re now guaranteed a spot in the Championship bracket. They play the Utah Pump-n-Run 16s (also 2-0) tonight for the Pool P top seed. See the tournament site for bracket seeding. Check out what happened in Pool H, for instance. Three teams finished 2-1, and use a tiebreaker of cumulative victory margin. So even though they all had the same record in pool play, and a winning record at that, Iowa Pump N Run misses the Championship bracket by a single point. Our Fury Gold boys had exactly that experience earlier in the year in a tournament in Lawrence, Kansas.

The Super Pool teams get an advantage in that they all make the Championship bracket and the top three teams in each Super Pool also get a bye to the round of 32. Even so, I have to say this is the best-run tournament I’ve experienced. In addition to the 88 16U boys teams, they have about 180 17U teams here, as well as smaller brackets in the boys’ 15s and 14s, and also 17U and 16U girls. They have a neat iPhone app too, that updates scores and gives directions to the game venues.

It’s also fun to see some of the top national college coaches here scouting the talent. At one game I watched today, Coach “K” from Duke was just across the court (he’s in the white shirt in the middle): 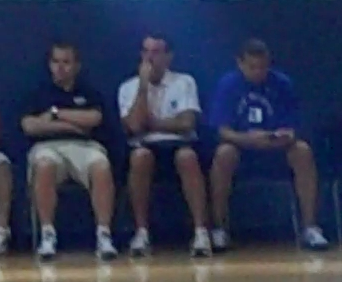 And just a few feet away was his rival, UNC Tar Heel coach Roy Williams (standing in pink): 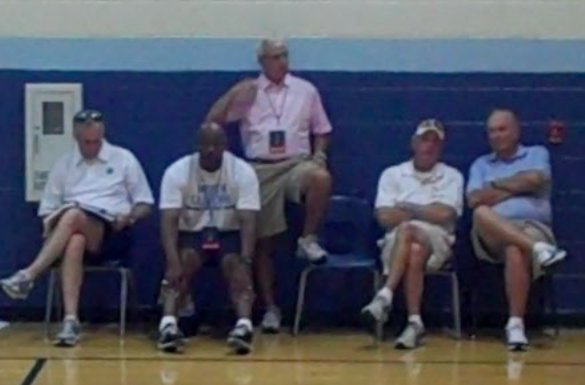 If the Fury win tonight, they’ll play the #4 team from Pool A. If they lose, they play the winner of Pool J.

I’ll update this post with video after the Utah game.

My son Joe has just finished his sophomore year of high school, and so as a member of the Class of 2013 this was the first day he could receive calls from Division I basketball coaches, according to NCAA rules. Today he’s talked with coaches from Cal Poly, Illinois-Chicago and South Dakota State. It’s an interesting process, and our first experience with it at the D1 level.

Joe has had a fun spring season with the Minnesota Fury Gold 16U team (along with two other players from his Austin High School team – his cousin Tom, also a sophomore, and freshman Zach Wessels.) Their Fury team is 35-4 on the spring and is playing great team ball. They resume tournament action in July, playing the King James Summer Showcase in Chicago, the Best Buy Pump N Run tournament in Minneapolis and the Adidas Super 64 in Las Vegas.

In June, Joe, Tom and Zach are playing with their Austin High School teammates in several team camps. This weekend they play at Iowa State University in Ames, and last weekend it was in Cedar Falls at University of Northern Iowa. Here are Joe’s highlights from the game against the Howard Pulley 16U team, one of the top AAU all-star teams in the state. Joe was 11/14 from the field (8/9 from three-point range) and had 30 points. The Packers dropped an 86-84 contest on two free throws by Siyani Chambers with :06 remaining.

Note: This video includes every shot Joe took in the Pulley game. I thought it was helpful to show the misses as well as the makes. And at the 1:00 mark I missed the finish on his breakaway dunk. It’s kind of hard to get all the action when you’re sitting under the basket instead of at midcourt.

Here is a more extended highlight reel that is mostly made up of footage from Joe’s sophomore season in high school.

We’re looking forward to what should be a fun Summer. I’ll occasionally post some updates here in the coming months. See the Packer Fast Break Club site for more in-depth coverage.