I’m excited that we are on the verge of beginning the health care social media summit, which we are hosting at our Scottsdale, Arizona Mayo Clinic campus in collaboration with Ragan Communications. The pre-conference sessions start tomorrow, with the full conference kicking off on Monday.

I will be delivering the opening Keynote on Monday, and part of my role (and my goal) is to set the tone and provide pointers on how participants can have the best possible experience. I will be posting my slides for reference here on SMUG, but I wanted to start by offering some links and tips that I hope will be especially helpful for those who are newer to social media.

If you haven’t yet made plans to attend the summit, you can still sign up for the Webcast. Video recordings will likely be available for purchase following the summit. Meanwhile, please do join in the conversation via the means listed above.

I had a chance to meet Tuesday with Aaron Hughling (@aaronhughling), all-around Web guy for Scott & White Healthcare, and his colleague Rhona Williams London, who is the head of PR for Scott & White. After about a year of investigation and preparation, their system (based in Temple, TX) is getting ready to launch into Facebook, YouTube, Twitter and a couple of blogs.

Aaron and I have been interacting through Twitter and email for several months, and I met Rhona at a conference in Phoenix in June. It was great that they were in Minnesota so we could sit down for a chat among SMUGgles.

Aaron also said he’s excited to be attending, along with one or two others from Scott & White, the social media summit for healthcare Mayo Clinic is hosting with Ragan Communications in October in Scottsdale, Arizona. I’m looking forward to it, too; if you attend I believe you’ll come away both inspired to bring social media to your organization and encouraged by the examples you’ll see and hear. There’s still time to register, so I hope you’ll join us.

After our conversation, I asked Aaron if he would be willing to share some of the things he’s learned through his social media journey. Here’s what he had to say. It’s some good advice:

What lessons from your journey into social media do you think would be most helpful to others looking to get started? If you had one thing you could go back and do differently, what would it be? Or if you haven’t taken the plunge, what questions do you have?

On Tuesday, August 4, I’m going to be presenting a free webinar, sponsored by Ragan Communications, on our Mayo Clinic social media experience.

The webinar was announced this morning, and Ragan CEO Mark Ragan tweeted this afternoon that the response has been strong: 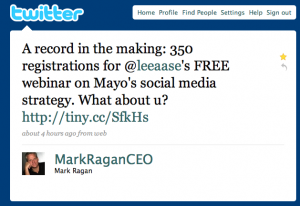 I have no idea what kind of record is in the making, or what the old record might be, but if you’re interested I hope you will sign up to join us. Please pass this along to anyone you think might find it helpful.