Our basketball games in the Chicago suburbs this weekend in the King James Summer Showcase (my son Joe was playing in the 16U division) were held at Lake Zurich (IL) High School. As I was reading the list of conference and section championships won by the Lake Zurich Bears, I also couldn’t help notice the words to their school fight song, on a placard donated by the class of 2005 (click to enlarge): 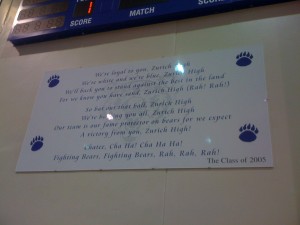 We’re loyal to you, Zurich High

For we know you have sand, Zurich High (Rah! Rah!)

So bat out that ball. Zurich High

We’re backing you all. Zurich High

Our team is our fame protector on bears for we expect

A victory from you, Zurich High!

“For we know you have sand?” Really? And while I’m sure some of the punctuation and phrasing was missing, I was scratching my head at “Our team is our fame protector on bears….”

When I was growing up in Austin, Minnesota I always thought our school fight song was pretty solid, with maybe just one glitch:

Waving for those courageous and bold, so

Here’s your chance to get in on the fun as we crowdsource the best and worst of school fight songs. In the comments below, post the lyrics from your school song (whether high school or college) and/or those from your arch rival. Depending on the level of response and interest we may select some finalists and vote have a public vote.

I know I’ve seen some pretty bad school song lyrics in high school gyms throughout the midwest, and I’m sure there are many more like them. This is a chance to bring them all together in one place to give them the recognition they deserve.

Update: Just to clarify, I’m not calling Zurich High’s the dumbest school fight song. I hope the revised headline makes that point. I would like to know what the context of “we know you have sand” is, but maybe there’s a really good explanation that would be extraordinarily meaningful. I’m just using some song lyrics that struck me as funny to crowdsource (and celebrate) a list of interesting and peculiar fight songs that may have made sense at the time they were written, but for which the lingo is way out of date. And it’s all in good fun.

Further update: This from a reader in Illinois: “The Zurich song borrows heavily from the Illinois fight song – Illinois Loyalty. Illinois Loyalty was written around 1906, when “having sand” alluded to the strength and utility of sand bags on the farm.”