As I have been asked to keynote some conferences on social media in healthcare I have found it necessary, or at least desirable, to take a broader view of the topic instead of just describing our Mayo Clinic experience.

Don’t get me wrong: I actually think our Mayo Clinic experience in social media, and the story behind it, is probably the most important contribution I can make to the discussion. After all, philosophy is cheap. Anyone can pontificate on what “should” be done, but having a concrete story to tell of how social media have actually been implemented is more valuable.

But sometimes it’s helpful to also be able to generalize from the specific, to help elucidate underlying principles that the specific examples illustrate.

As I was preparing for Healthcamp Minnesota and that keynote, I was drawn to develop some basic principles for healthcare social media. And being of a Reformed Christian background, I couldn’t help noting that we’re coming up on Reformation Day, October 31 (other folks call that day “Halloween”), which is the 492nd anniversary of the day Martin Luther nailed his 95 Theses to the church door at Wittenburg, Germany. 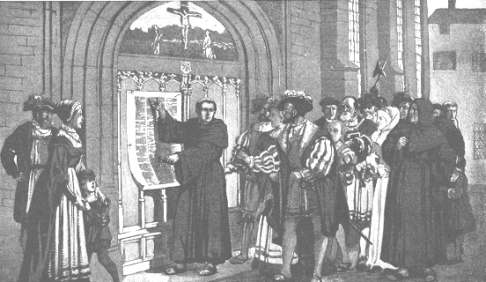 And it began as follows:

Out of love for the truth and the desire to bring it to light, the following propositions will be discussed at Wittenberg, under the presidency of the Reverend Father Martin Luther, Master of Arts and of Sacred Theology, and Lecturer in Ordinary on the same at that place. Wherefore he requests that those who are unable to be present and debate orally with us, may do so by letter.

Because of a technology that had been developed relatively recently, the Gutenberg printing press, Luther’s theses went “viral” and changed the course of history. They were translated from Latin into German and spread throughout Germany within two weeks, and throughout Europe within two months.

So although I have no delusions about the relative import of my thinking compared with Luther’s, tomorrow I’m going to post my own set of theses relating to social media, and will invite your feedback and participation, or even disputation.

There won’t be 95 of them (but there will be more than the five I outlined at Healthcamp MN), and I’m confident the publication of these theses won’t require me to go into hiding in a castle in Germany (although, come to think of it, that wouldn’t be the worst thing!)

Just as technology gave viral reach to timeless truths as recovered by Luther, today’s social technology will enable these social media theses to spread rapidly (if they’re any good). It’s a testament to the advance of technology that within two days of publication (based on what I see in my Google Analytics), these theses will likely have been read on six continents.

Luther’s theses had eternal significance for people’s immortal souls. Mine might just help you better understand the communications and marketing landscape, and thereby achieve some of your more temporal goals.

Luther wanted to start a discussion or an argument, even though he was fairly convinced he was right. I likewise hope to spark discussion with my social media theses, and some of that will take place starting Monday in Las Vegas at the Healthcare Internet Conference. But to paraphrase Luther’s request, if you are unable to be present and debate orally with us, I hope you will do so by Tweet, comment or blog post.

Check back here tomorrow for discussion and disputation.

Tomorrow I’m giving a presentation at the e-Patient Connections conference (#ePatCon) in Philadelphia, at the Park Hyatt Bellevue. It’s a really neat hotel, but the broadband “tubes” have a serious case of atherosclerosis.

Here are my slides.

I’m really looking forward to meeting a lot of people with whom I’ve only Tweeted previously. Just met @epatientdave in the lobby on the way up to my room. Will hopefully see @PhilBaumann, @MeredithGould and @DanaMLewis tonight too…and lots more tomorrow, including @SusannahFox.

I’m excited that we are on the verge of beginning the health care social media summit, which we are hosting at our Scottsdale, Arizona Mayo Clinic campus in collaboration with Ragan Communications. The pre-conference sessions start tomorrow, with the full conference kicking off on Monday.

I will be delivering the opening Keynote on Monday, and part of my role (and my goal) is to set the tone and provide pointers on how participants can have the best possible experience. I will be posting my slides for reference here on SMUG, but I wanted to start by offering some links and tips that I hope will be especially helpful for those who are newer to social media.

If you haven’t yet made plans to attend the summit, you can still sign up for the Webcast. Video recordings will likely be available for purchase following the summit. Meanwhile, please do join in the conversation via the means listed above.

This morning I have the opportunity to present at a LifeScience Alley educational forum. The title of the presentation is Leveraging Social Media to Reach Customers and Improve Organizational Effectiveness: The Mayo Clinic Perspective.

Here are my slides:

I’m looking forward to this presentation and the ensuing discussion, and hope the conversation will continue here.

I was honored last week to have a chance to be interviewed by Lee Odden, a fellow Minnesotan with a cool first name who also has one of the top PR, marketing and SEO blogs. Here is one of his 10 questions, along with my answer, published this morning in his post, “Social Media Interview: Lee Aase of Mayo Clinic”:

Do you test specific social media tactics or do you go full on with a social media strategy for each initiative? Knowing what you know now, what approach would you recommend that companies take when they’re starting out?

I recommend what I call the “MacGyver Mindset,” named after the TV character played by Minnesota native Richard Dean Anderson. Look at the tools and resources you have available and how you can adapt them to meet your communication and marketing goals, and empower staff to explore.

Focus first on the free platforms such as YouTube, Facebook and Twitter, mainly because that’s where you will find communities already gathered. This also enables you to prove your concepts before deciding whether to launch a community of your own.

Strategic thinking can be an excuse for inaction, and just as it’s easier to alter the direction of a moving car than it is to get one started from a dead stop, I believe it’s best to build social media momentum through low-cost experimentation and iteration.