I appreciate all the positive feedback and re-tweets for yesterday’s post on the SMUG Social Media Pyramid. We even have our first graphical representation (click image to enlarge), submitted by Jason Melancon from the Louisiana Public Health Institute (LPHI). 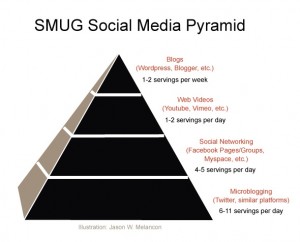 One point that Jason mentioned in his email deserves further amplification. He said “I think the servings on social networks (in my own opinion) should be per week as opposed to per day.” And this leads me to the discussion of portion size and servings.

Have you ever noticed after drinking a 20 oz. bottle of Coke, when you turn it around and read the label, that you’ve just swallowed 2.5 servings? Or when you nuke a bag of microwave popcorn, do you always share it with two other people, as the label would indicate you should?

Welcome to the world of unrealistic portion sizes, at least in America. It likely helps to explain our obesity epidemic, but it also has application when we’re looking at our SMUG Social Media Pyramid and what a “serving” is.

On the SMUG Pyramid, essentially any activity qualifies as a “serving.” The tweet I will do about this post is a serving. A reply to those who re-tweet is a serving. And tweeting a link to another interesting article is, too. Relatively easy to get your 6-11 servings per day.

In the social networking sites, the reason I have 4-5 servings per day instead of per week is because posting a link is a serving. So is interacting with someone who writes on your wall, or uploading a photo, or creating an event, or uploading a video.

At the higher levels, Web Video and Blogs, the criterion for what constitutes a serving is a little higher. You can’t do half a video, and you either publish a new blog post or your don’t. But the interacting you do on YouTube, for instance, actually falls more within the social networking servings. So your 4-5 daily social networking “servings” may include comment activity both on Facebook and YouTube.

The other point to remember is that a pyramid like this is just a general guide, and your situation may call for different portions. I’m 6’6″ and weigh (…well, let’s not get into that!) My food portions are going to naturally be bigger than a 5’2″ female. At least it’s how I rationalize eating the whole bag of microwave popcorn. And despite that, I know I don’t always get the five servings per day of fruits and vegetables that USDA suggests.

The SMUG Social Media Pyramid is just a guide; a framework for thinking about social media involvement. Unlike the USDA, I can’t say it’s based on scientific research. I also have to confess that sometimes I get out of balance with it, both in my personal accounts and at work. Sometimes I overload on Twitter, for instance, and don’t get enough servings of the others.

But just as you’re not going to drop dead tomorrow for failing to eat enough fruits today, there’s flexibility with your social media diet too. You’re looking for balance over time for maximum health.

In a future post I’ll discuss the real key to portion estimation, which is serving with your servings.

SMUGgle Maddie Grant, the formerly reluctant blogger, makes a good point when she (after her obligatory allusion to my awesomeness) says I made her want to tear her hair out with the Social Media 110 course.

She’s absolutely right: you don’t need seven ways to shrink your URLs. It only takes one. Pick one that works for you and use it. Social Media 110 probably should have been a 200-level course; as you’re starting with social media, it’s not essential that you understand all the different ways you can shrink your URLs.

This reminds me of a story, which I believe was in Made to Stick, about a study of college students and their choices. When given a choice between studying and going to a movie, something like 30 percent chose studying. But if the choice was between studying, the movie and another event (some kind of interesting lecture or presentation), the number of people who chose to study actually increased. More choices made it harder for the students to decide which of the fun things to do, so they were more likely to default to studying.

I hope giving you seven ways to shrink URLs doesn’t likewise create indecision for you, or overwhelm you with options. You surely don’t need to try them all. I like SnipURL because it has a browser bookmarklet that makes posting items to Twitter really easy. So if you’re looking for a recommendation, that would probably be mine.

But any of these services are fine. The main point is to just start using one of them.

That’s also another reason why I do all my posts about blogging with reference to the WordPress platform. Blogger and Typepad are fine, and if you like them, use them. I had visiting professors review them as part of the blogging curriculum.

But my main goal with SMUG is to help people get engaged in social media, using state-of-the-art tools, so I just picked the one blogging platfrom I think is best and most powerful. And I want to be able to go deeper with one platform, instead of saying “This is how you do it on WordPress, but you can do the same thing on Blogger by… and on TypePad by….” I just don’t have the time or inclination to do the same thing three different ways. And I surely won’t be shrinking my URLs seven different ways.

Choosing your blogging platform is a lot more consequential than deciding which URL shrinker to employ, because you could change the latter every day (not that you should) without really affecting anything, but it’s harder to make a switch once you’ve decided on a platform for your blog.

Meanwhile, Maddie’s post gives me further impetus to provide some recommendations on a few steps everyone should be taking — sort of an updated, “new-and-improved for 2009” version of Social Media 101. Instead of 12 steps I will probably have five or six that I would call “must-dos.”

In doing so, I hope to help you avoid the indecision that leads to procrastination, and give you concrete steps that will be fruitful for you personally and professionally.

It’s a balancing act in which the inclination toward research as befits a global university (and one that is nearing the one-year anniversary of its formal establishment!) is in tension with the desire to make things straightforward and simple for beginning SMUGgles. Thanks to Maddie, I’ll try to be more clear when I’m exploring a range of options as a research project, and that I’m not recommending that everyone go forth and do likewise.

This post is from the SMUG Department of Philosophy. It isn’t about social media as much as it’s about personal growth. But in keeping with the rest of the SMUG curriculum, it’s based on my practical experience, and what has worked for me. In writing it I’m mainly reminding myself to apply what I’ve learned, so that in the coming year I might repeat my occasional successes instead of my more plentiful failures. If it helps you, so much the better.

In other words, it’s SMUG philosophy, not smug philosophy.

More often than not, January 1 has essentially taken me by surprise, like I didn’t even see it coming. As I overdosed on college football and enjoyed what was typically the last day of a break from the office, I suddenly realized I was at the start of whole new year and that I should think of some things I want to change. And without exception, those New Year’s resolutions have been shoved to the back burner within the next couple of weeks, and usually much more quickly.

But I have had some instances in which I was able to make meaningful long-term changes. So as I reflect on them, I want to draw some insights and tips that will help me as I look to mend my ways in 2009. You might consider applying them, too.