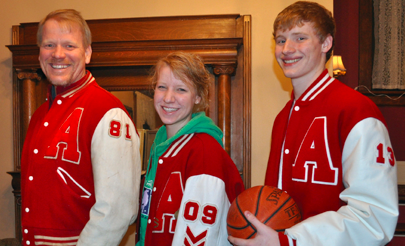 The red-and-white Packers from Austin had a better weekend than the green-and-gold ones from Wisconsin. The Austin boys traveled to Rochester for a game with Century High Friday night, and both team entered the game tied for first place in the Big Nine conference with just one loss.

Here is the late Friday Sports Extra from the local TV station, KTTC, where one of my high school contemporaries, Pat Lund, is the sports anchor.

Pat was a member of the Rochester Mayo high school team. He graduated in 1982, a year after I graduated from Austin. The segment starts with a recap of the Austin-Century game (including a bunch of plays by my son Joe and nephew Tom), and if you keep watching until the first wave of highlights is done (maybe 3-4 minutes into the segment), you’ll hear Pat reminisce about the Chancellor.

In follow-up Social Media 220: How to Customize Your YouTube Player, in which I showed how to tailor your users’ experience of the embedded YouTube player using this tool, here’s a fun personal video.

Last night the Austin Packers basketball team, on which my son Joe and nephew Tom are starters, had the largest margin of victory for an Austin basketball team in at least the last decade, as they cruised to a 74-19 win against winless Faribault. The starters played less than half of the game, but here’s the highlight taken from the four-minute compilation, as Joe took a beautiful Alley Oop pass from point guard Zach Wessels for a dunk:

If one of the rules for getting more video views is to have the video start fast and grab attention, jumping in at the middle lets you do that while keeping the rest of the video for context. And if you watch the whole thing starting from the beginning you’ll see that Tom almost had a similar dunk at the 1:19 mark.

We’re proud of how well the boys play, but more importantly how they play…as a team. And it’s pretty neat for my parents to be able to watch their grandsons on the same court, in the community where our family has lived for more than 40 years.

Now if I could just get Joe to update his Twitter avatar. 😉

That’s how I would describe this Adidas Super 64 tournament. In the first two days, the teams are in pools (as I described in this post), which is like the conference regular season. Those teams that do the best in the pools (or are in a Super Pool, the equivalent of one of the BCS conferences) make it to The Big Dance, or the Championship Bracket. The others go into the Gold Bracket, which is analogous to the NIT.

Yesterday our Minnesota Fury Gold boys lost in the equivalent of an NCAA 7 seed vs. 10 seed matchup. I’ll update this post later with video highlights. But overall this Adidas 64 experience has been great, and after a trip to the Hoover Dam today we’ll check out the semifinals and finals tomorrow in the 17-and-under division. Many of the players in those games already have committed to major colleges, so it will be fun to watch some high-level ball.

This tournament brought the Fury Gold season to an end, and it was a great experience. My son Joe got to play with his cousin Tom and another Austin High School teammate, Zach Wessels, and some great boys from the Twin Cities area. They went 42-8 on the season and won several tournaments.

Given that they play only 24 games during their regular high school season in Minnesota, maybe the better analogy is that this AAU season from April to July is like two regular seasons. And especially since they are mostly playing against the best competition in their age group from the northern U.S.  (or in the case of this Las Vegas, from the whole country), it’s been a great way for them to develop their skills and become better players.

It should make for a lot of fun during next year’s Austin Packers regular season.

I had originally planned to update yesterday’s post with highlights from the Minnesota Fury Gold 16s game vs. Utah Pump N Run Red 16s, but the performance last night was so strong that I decided this win deserves a post of its own.

The Minnesota lads spotted Utah a basket, but then went on a tear, building a 32-21 halftime lead. The lead was narrowed to five on a couple of occasions in the second half but the Fury played tenacious defense and took care of the ball for a 52-36 win. Let’s go to the highlights:

Now the Fury enter bracket play and face the fourth-place team from Super Pool A, Wisconsin Playground Warriors, who lost their three pool games by a total of 13 points against top competition. They’ll no doubt be hungry, so our boys will need to be at their best.

It was nice to see @tchoopsczar yesterday (here’s his blog); when we chatted after scouting the Playground Warriors he mentioned that Minnesota teams were undefeated in the Adidas tournament. As of this writing the Minnesota teams are 24-3 overall (The Fury program is 11-0). We’ll see how bracket play goes, but so far it’s a good showing for the Gopher state.