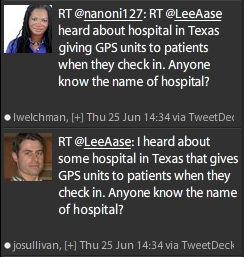 What does it mean/do when a word on Twitter is preceded by a #?

Answer: The # is called a hashtag, and is described in detail on the Twitter fan wiki.

Hashtags are a community-driven convention for adding additional context and metadata to your tweets. They’re like tags on Flickr, only added inline to your post. You create a hashtag simply by prefixing a word with a hash symbol: #hashtag.

Hashtags were developed as a means to create “groupings” on Twitter, without having to change the basic service. The hash symbol is a convention borrowed primarily from IRC channels, and later from Jaiku’s channels.

hashtags.org provides real-time tracking of Twitter hashtags. Opt-in by following @hashtags (on Twitter) to have your hashtags tracked. Similarly, Twemes offers real-time tracking without the necessity of following a specific Twitter account. Also, with their purchase of Summize, Twitter itself now offers some support of hashtags at their search engine: http://search.twitter.com

See the Twitter fan wiki for more details on how to use hashtags, as well as some examples.

Hashtags are especially useful for conferences, meetings or events, to enable you (and others) to follow specific topics. During the recent election in the U.S., a special site was established that filtered all Tweets with the tags #obama, #mccain, #palin or #biden. This enabled a conversation among people who weren’t following each other. The same thing happened with the #mumbai terrorist attacks.

On a less global scale, if you have a conference or seminar and want to engage the participants (instead of having them be “the audience”) you could create a hashtag and encourage everyone to use it. It’s a great way to gather feedback from everyone in the room. Instead of standalone audience response devices, you could just ask people to tweet from their cell phones, wifi-enabled laptops, Blackberrys or iPhones.

And instead of just gathering feedback, you’re actually enabling your participants to interact with and build upon each other’s ideas. It could have an undesirable snowball effect if a tough crowd gangs up on a speaker (see this example involving Facebook founder Mark Zuckerberg being interviewed at a conference), but the the positive potential also is great.

So you can be proactive and enable this kind of discussion at your meetings, and hopefully steer it in a positive direction, or you can be oblivious. I recommend the non-oblivious strategy.

Thanks for your question, Ryan.

To submit an RAQ (that’s a Recently Asked Question), just comment on any post or send me an email (see the Contact the Chancellor box at right.)