I’m doing a presentation early this afternoon for the Workplace Partnership for Life, a program that encourages organ donation campaigns. We will be hearing some case studies from other presenters, but I have been asked to share 15 minutes on “Using Social Media Wisely in a Health Care Setting.”

Here are the slides I’ll be using:

I look forward to the discussion this afternoon! And of course, it can continue here and on Twitter!

Here’s an interesting story from the Minneapolis Star Tribune, which illustrates an interesting and unusual application of social media tools in health care and medicine:

Chris Strouth needed a kidney transplant. He’d been on dialysis for months after Berger’s disease (which he called “Harold”) wreaked havoc on his renal system. So he tweeted about it, casting a wide electronic net with a plea to anyone he was even remotely connected to online. He got an impressive 19 offers, and one match — casual acquaintance and Facebook friend Scott Pakudaitis of St. Paul, whose left kidney, “William the Conqueror,” was transplanted into Strouth in December. Both are doing well, and the rest is Facebook history.

Check out the rest of the story.

I’m in St. Louis this afternoon for the Association of Organ Procurement Organizations‘ annual meeting. If you want to see what anyone is saying about this in Twitter, use the #aopo hashtag.

Here are some other links participants might find helpful: 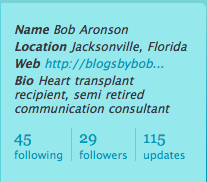 Today I’m participating in an event for patients, family members and health care professionals at Mayo Clinic in Rochester. It’s called “The Voice of the Patient in Harmony with Care: Safety Through Patient and Provider Partnerships.” My presentation, which I’m giving at 9:30 a.m. and 12:45 p.m., is entitled, “The Internet and Partnership Communication Opportunities of the Future.”

I’m embedding the slides from my presentation here, and including some key links below. I would appreciate any comments, questions or other feedback from the participants, and of course if any want to become SMUGgles, you’re completely welcome.

Here is our Mayo Clinic YouTube channel, as well as one of the patient story videos from Rhonda King.

This is the link, I believe, to the Long QT group on Yahoo that she mentioned.

Those who want to learn more about social media can enroll in SMUG, or just start with the Core Courses or the Facebook curriculum.

Please feel free to engage here in the comments, and discuss how these powerful tools could help meet important communication needs in the patient/provider relationship.