Yesterday as part of my presentation for the Benedictine Development Symposium in Schuyler, Nebraska I did a little demo to show the Tweetcamp participants the speed and reach of Twitter.

The exercise was amazing; within less than an hour we had responses from Australia, Spain, Sweden and Italy and several Canadian provinces (including one tweeted from an airplane), as well as about 20 U.S. states.

Thanks to everyone who retweeted or replied! You made an impression on the participants in the symposium!

The participants found the content of your tweets encouraging and inspiring, too…not just the wide geographic dispersion.  Thanks for your help! 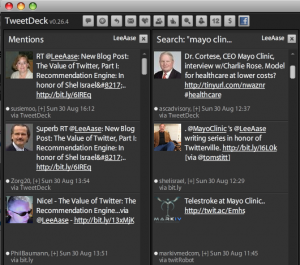 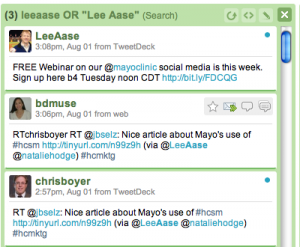 I got an invitation last week to upgrade my HootSuite account to version 2.0, and I’m really liking what I see.

I’ve long appreciated the ability within Hootsuite to pre-schedule tweets, and to manage multiple Twitter accounts. So, for example, when I was doing an event (such as Tweetcamp III), I have scheduled tweets for various times throughout the course of the presentation, to include links to particular items I was referencing. It’s particularly helpful for highlighting key Web sites or blog posts when part of the group is participating remotely.  And in the middle of a presentation I have to stay focused, not taking a minute to send a tweet.

Among the improvements of Hootsuite 2.0 I like the most:

Twitter’s open platform that enables outside programmers to add new functionality is one of its best features, and I think Hootsuite has made some significant advances to incorporate a lot of the best features in some of the desktop clients and Web-based  platforms for Twitter.

What tools do you find most helpful in making Twitter more productive?

In Tweetcamp III, as in previous Tweetcamps, I have provided Twitter etiquette guidance for those new to Twitter. More recently, thanks to @shwen, I’ve called that section “How to build ‘Tweet Cred.'”

One of my strong recommendations is to avoid using services that send automatic direct messages to your new Twitter followers. If you’ve been in Twitter and have followed even a few people, you’ve probably gotten some messages like this in reply to some of your follows:

Thanks for the follow! I’m so glad we’ve connected. Looking forward to your tweets.

This was sent by a robot, not a person. And it’s a step away from what Twitter is all about, which is real conversations with real people.

A SMUGgle recently asked, “So why are these automatic direct messages so bad?” So in keeping with our “Recently Asked Questions” format, I’m answering here to make it available to everyone.

And if others have additional comments or reasons (or even a contrary opinion, though I’m doubtful of that based on the reactions I saw in in the #Tweetcamp3 stream), please add them in the comments below.

Let me give you a real-life analogy taken from our recent experience with high school graduation parties. My wife Lisa and I are at the stage in life in which we attend lots of these, both for extended family and friends of our kids. And of course it is the common courtesy for graduates that when someone attends your graduation open house and gives you money, you should be sure to send a thank you note. (My daughters are still finishing theirs.)

The thank you notes we received from two grads, whose open houses were held he same day, illustrate why auto direct messages to new Twitter followers are a bad idea.

Let’s call these young men Tim and Mark (not their real names.) We received notes from both “Tim” and “Mark” at about the same time. The language on both was similar…something to the effect of “Thanks for coming to my graduation party and for the gift of money for my graduation. I’m going to use the money to help pay for college expenses.”

But while “Tim’s” was written by hand, “Mark” had photocopied the text and pasted it into the card, and then just signed his name.

Which do you think gave us a warmer feeling?

Twitter is a person-al medium. Let’s keep it that way!

What do you think? Do you have other reasons why auto d messages in Twitter are bad? Or do you think there is any place for them? 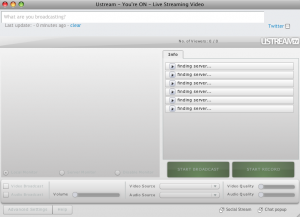