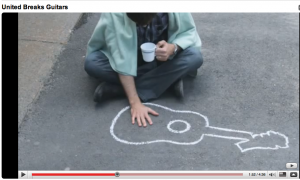 Social media are not the panacea for all that ails the relationship between organizations and their customers or other stakeholders.

If you treat people badly, they now have not only the opportunity to take the story public, which they always had, but also the ability to tell the story themselves instead of having to rely on third parties like the news media to spread the word.

And of course, as we saw this year in the case of Dave Carroll’s spat with United Airlines, sometimes the story can both go viral and lead to mainstream news media coverage.

The basic story, if you haven’t heard, is told in this United Breaks Guitars video. The customer service representative could have kept the video from being made by simply agreeing to Mr. Carroll’s request for $1,200 in flight vouchers to reimburse his expense for fixing is $3,500 Taylor guitar. It would have cost United nothing in cash, but when Ms. Irlwig said “no” he said something to the effect, “Fine, I will just make a series of three YouTube videos with my story.” Here’s the second installment. If you haven’t watched both of those, take a minute to do so now. I’ll wait.

OK, now that you’re back, here are a few lessons or observations from this saga:

Social media can provide great listening tools to alert you to a problem that could blow up into a PR nightmare. But they don’t do any good if you don’t act based on what you hear. In this case, Mr. Carroll was right in Ms. Irlwig’s ear. No complicated listening tools needed. If you’re not going to do the right thing for your customers, social listening tools will be of little value.

As Amy Mengel put it at the time, the secret to avoiding a YouTube crisis is: “Don’t suck so much in the first place!“