For a blog that started out with a nondescript alliteration as its title – Lines from Lee – it’s only fitting that I would have a similar approach to the title of this post as I celebrate the fifth anniversary of my first blog post – four days late.

I’ve made it a point each year at this time to take a look back on how this blog has changed – and changed me – over the previous 12 months. See my first, second, third and fourth blog birthday posts for my journal on the journey.

This year, as I celebrate the fifth birthday of what has become SMUG, I’m also celebrating the first anniversary of Mayo Clinic establishing our Center for Social Media.

If I thought the first four years were eventful, this last one has felt like a Space Shuttle launch. It’s been gratifying to recruit a fantastic External Advisory Board, a tremendous staff (click to enlarge the team photo from our recent retreat) and to see more than 80 organizations join our Social Media Health Network. 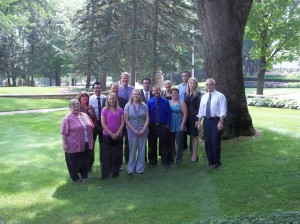 And while NASA is winding down the Shuttle program, we’re just getting started. We’re holding our Third Annual Health Care Social Media Summit in Rochester in October in collaboration with Ragan Communications, along with our Network Member Meeting and Social Media Residency. We’re also holding a contest for patients and caregivers to attend for free (and even get airfare and lodging costs paid.)

Much of my blogging has been on the Mayo Clinic Center for Social Media site (and the related Network member community), so my posting frequency on SMUG has suffered a bit. I definitely plan to still keep growing the SMUG community and provide resources, though (we’re at 1,265 SMUGgles as of today), and maybe recruit more associate professors with honorary doctorates.

If you would like to be among the honorary SMUG Ph.D.’s, drop me a note using the Contact Form. I would be glad to involve other contributors on the SMUG Faculty.

These last five years have been amazing. Thanks to everyone who has been part of it.