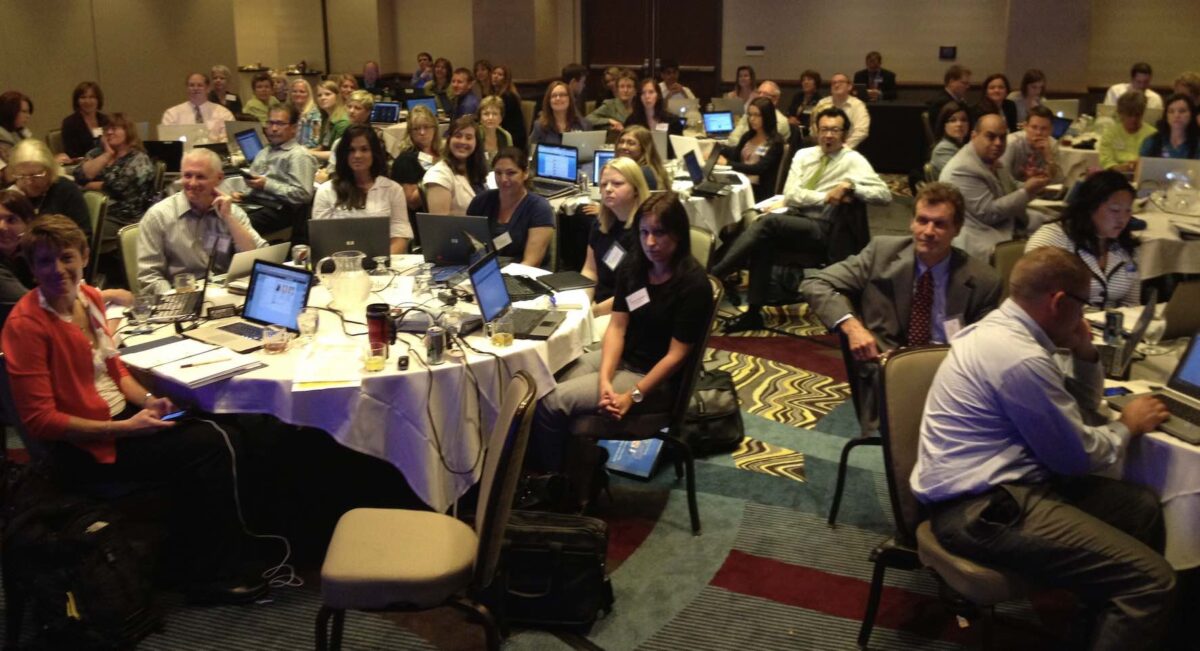 From 2012 to 2014, Mayo Clinic’s social media program through the Mayo Clinic Center for Social Media (#MCCSM) and the Social Media Health Network (SMHN) continued to grow significantly both in the number of people involved and in concrete accomplishments.

Two of the major developments in this period included Social Media Residency and our book, Bringing the Social Media Revolution to Health Care. After I describe those, I’ll finish with a few other highlights.

We held our first Social Media Residency in conjunction with the #MayoRagan conference in 2012. This was a chance for both our Mayo Clinic staff as well as those coming to the conference from around the U.S. (and increasingly from distant lands) to have an intense, hands-on experience in using social media and discussing health care applications.

We called it “Residency” both because people were “in residence” at Mayo Clinic for this experience, and as an analogy to medical residency as the way medical school graduates get their advanced training. We extended this metaphor throughout the program, as for example we had Facebook, Twitter and video “rotations” and members of my team and External Advisory Board members were “chief residents.”

That first time we carried it a little too far, however. Medical Residency is grueling, so we (or rather I) thought we should do the same with Social Media Residency. We made it a two-day program crammed into a day and a half. How?

And then we gave the Residents an assignment to draft a social media strategic plan overnight, to present the next morning.

This was after most had already participated in the #MayoRagan conference, which was two full days (plus optional pre-conference workshops.)

We had open rebellion in the ranks.

We learned from our (my) mistake, however, and dialed it back to a single day and with a more normal 8-5 schedule. For the next couple of years held Social Media Residency twice per year on each Mayo Clinic campus (Rochester, Minn., Jacksonville, Fla. and Phoenix/Scottsdale, Ariz.) One was in conjunction with #MayoRagan, while the others were standalone. We maintained a ratio of one Chief Resident per eight Residents, and at the end of the program presented certificates to the strains of Pomp and Circumstance.

In addition to other resources and handouts in their official binder, Residents also received a copy of our book, Bringing the Social Media Revolution to Health Care, as their textbook. We published this just in time for #MayoRagan 2012 and it was the big project Dr. Timimi and I revealed in our opening keynote.

Bringing the Social Media Revolution to Health Care was a collection of essays, mostly from members of our External Advisory Board (EAB), making the argument for why health care organizations and professionals should get involved in social media. Meredith Gould, Ph.D. was our editor, and besides Dr. Timimi and me and a foreword from Mayo Clinic CEO John Noseworthy, M.D. (which I may or may not have had a role in drafting) authors included:

As I flip through the book’s pages even today I’m amazed at the group we pulled together to produce this book, and the concise quality of the contributions. I’m glad it included several patient voices, and that we used all proceeds from sales of the book to support patient scholarships to attend our conferences and Social Media Residency, a decision the authors graciously and enthusiastically supported.

Some other key projects and developments during 2012-14 included:

Our #SocialAtMayo video, produced by Jason Pratt, which included members of our Mayo Clinic social media team explaining Mayo’s employee social media guidelines as well as several employees describing how they use social media in their work. It also has a nice soundtrack that will be familiar to those who watched the video in my last post.

As you’ll see in the video, we had added a new team member, Tony Hart, who had a position using social media to promote CME courses for the Department of Medicine.

We also added several new members to the EAB, as others completed their terms:

We began holding Social Media Grand Rounds, modeled after medical or surgical grand rounds meetings, as a way between conferences to share case studies or best practices, whether those were from within Mayo Clinic or from our member organizations.

Finally, in keeping with the Residency metaphor, we also developed a Social Media Fellows program for those who were taking home the lessons and applying them strategically in their work.

Lisa Wylde was the first person to achieve both Silver and Gold status. As a leader in the Australian Private Hospitals Association, she attended our conference and Residency and not only applied her learnings, but bought 1,000 copies of our book to distribute among hospital leaders in Australia.

Lisa’s involvement in the network led to some developments I never would have imagined.