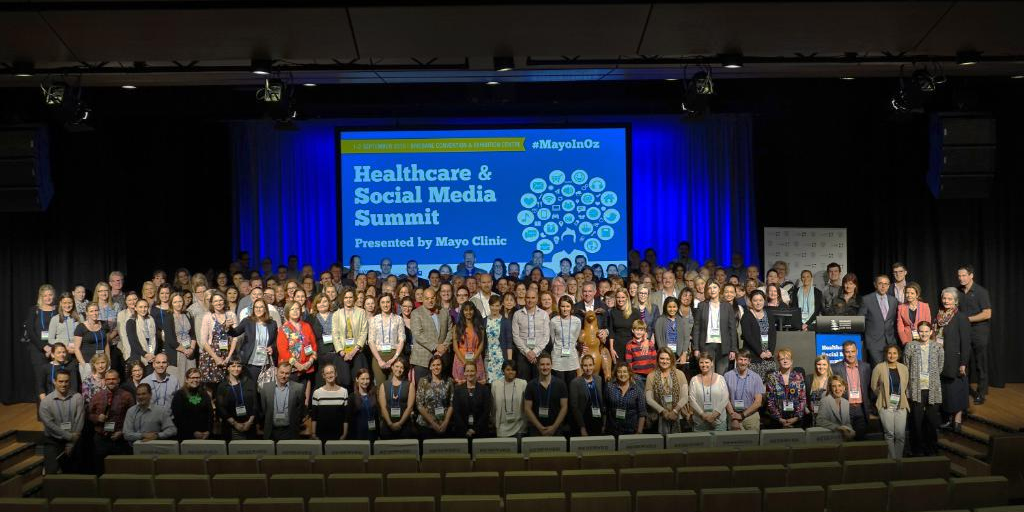 When we originally conceived our externally facing network in 2010, Mayo Clinic didn’t have a naming convention for an entity that was sponsored by Mayo but was comprised of external members, and thus we had to use the generic, non-branded name. But this also created confusion for our Mayo Clinic staff who we also wanted to be involved. When we invited them to join SMHN, it wasn’t apparent to them that this was a Mayo-sponsored site. Was it really even OK for them to join?

Mayo Clinic staff and students saw the shields logo and recognized it was an official Mayo site. And as we offered memberships externally, the value we could offer was access to the same training and resources Mayo Clinic provided for its staff.

Among those resources was the Social for Health Certificate from Mayo Clinic and Hootsuite. As Social Media Residency had evolved since 2012, it became apparent we needed to make it a more advanced program while remaining accessible for newer social media users. The online certificate, for which we secured CME accreditation through the Mayo Clinic School of Continuous Professional Development (MCSCPD), provided 24/7 on-demand access to basic training, and was a prerequisite for Social Media Residency.

We unveiled the online course in September 2015 at another milestone event, our first Mayo Clinic International Healthcare and Social Media Summit in Brisbane, Australia. As I mentioned in the previous post, Lisa Wylde from the Australian Private Hospital Association had attended one of the #MayoRagan conferences and strongly suggested we do an event like that in Australia.

Thus was born #MayoInOz, and the sequel the following year in Melbourne. I’m grateful to Lisa and the great planning committee that put together those events, to Ed Bennett and Cynthia Manley for their above-and-beyond support in getting to Brisbane to be part of the faculty and to Dr. Wendy Sue Swanson for keynoting.

See these recaps of Day 1 and Day 2 of the Brisbane conference, which also was where we met Dr. David Grayson from New Zealand, who joined our External Advisory Board and attended several of our conferences, both in the U.S. and in the UAE in December 2019 when we held the first Middle East Healthcare Social Media Summit at Mohammed Bin Rashid University of Medicine and Health Sciences (MBRU) in Dubai.

Special thanks to Dr. Amer Sharif (a real Chancellor) and everyone at MBRU for all they did to make that event a success, along with colleagues from (MCSCPD), Mayo Clinic Care Network and American Hospital Dubai. Among many other experiences, one special highlight of that trip was my first camel ride, with Dan Hinmon. Thanks to Dr. Timimi for suggesting we all do that desert safari on the morning we arrived!

Speaking of Dan, I also want to call out him and Colleen Young for the roles they have played since 2015. Dan was the Community Director for MCSMN and did so much to cultivate conversations and plan webinars and conferences. He’s a great colleague and friend, and also played an essential role in our #MayoSHSMD Virtual Conference, which I’ll discuss in a future post.

Both Dan and Colleen were among the authors contributing to Bringing the Social Media Revolution to Health Care, so their interest in this work predates their employment with Mayo.

When we launched that community in 2011 it was related to an advertising campaign in which one of the calls to action was “Connect with someone who’s been there.” For the first few years without strategic community management we had a lot more of the ad respondents as members of the site than we did people who had been to Mayo Clinic. Among her many contributions that are too numerous to mention here, Colleen has cultivated a community that is much more in keeping with the original vision of Mayo Clinic Connect, and has helped us achieve even more than we had considered.

And of course she’s Canadian, which is in keeping with the international theme of this post.

When discussing international participation I would be remiss if I were to fail to mention our good friend Shigeo Uehara from Japan, who attended annually both in the U.S. and in Australia, as well as Olga Schibli from Switzerland, who attended the last conferences in Phoenix and Jacksonville and who graciously hosted Lisa and me when we vacationed in Germany, Switzerland and Austria in April 2019.

In my next post I’ll highlight some of the projects we undertook with external collaborators, both for health promotion and disease prevention as well as to equip colleagues to use social media and digital strategies in their work.